Oak wilt is an aggressive vascular disease caused by the fungal organism Ceratocystis fagacearum (also known as Bretiziella fagacearum). The fungus grows on the outer sapwood and restricts the flow of water and nutrients through oak trees. This can quickly kill a tree within a few weeks.

How to report oak wilt

If you find this disease, or suspect it, it must be reported to the Canadian Food Inspection Agency (CFIA). The City of London is supporting the CFIA with early detection of the disease in Canada and asks residents that have concerns with an oak tree that dies suddenly or appears to be showing signs or symptoms of oak wilt to contact the CFIA or to the City at trees@london.ca

Oak wilt can be spread in different ways:

Oak wilt has not yet been found in Canada, but London is located close to this invading disease. Oak wilt is widespread in Michigan and can be found less than 600 metres from Windsor in Belle Isle, Michigan.

London is also located along the 401 corridor where oak wilt could inadvertently be brought into Ontario. This was the case when the non-native insect Emerald Ash borer affected our region.

The most noticeable symptom of oak wilt will be a sudden wilting and premature dropping of leaves. Other signs and symptoms include discolouration and bronzing of foliage starting from the outside margins of the leaf, and the development of fungal mats appearing on the trunk or larger branches. These mats typically appear in the spring after a tree is infected and can be associated with vertical cracks that are created by the outwards pressure of the mats. The fungal mats produce a sweet smell described as being identical to Juicy Fruit™ gum. Beetles are attracted to these fungal mats and may carry the fungal spores to the next host tree. 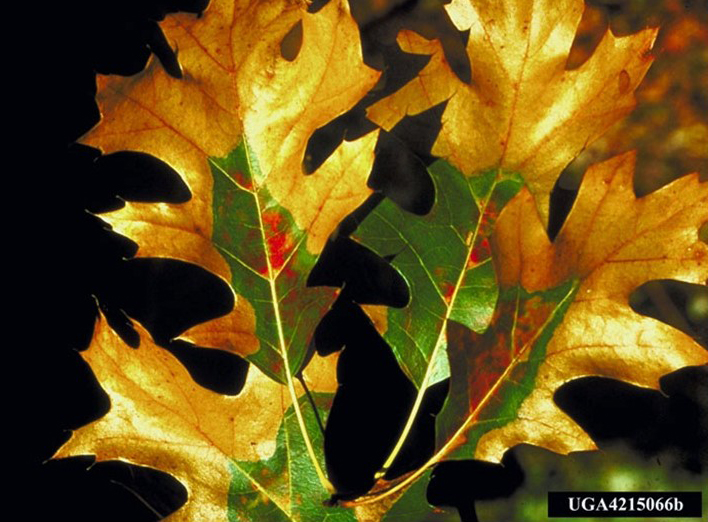 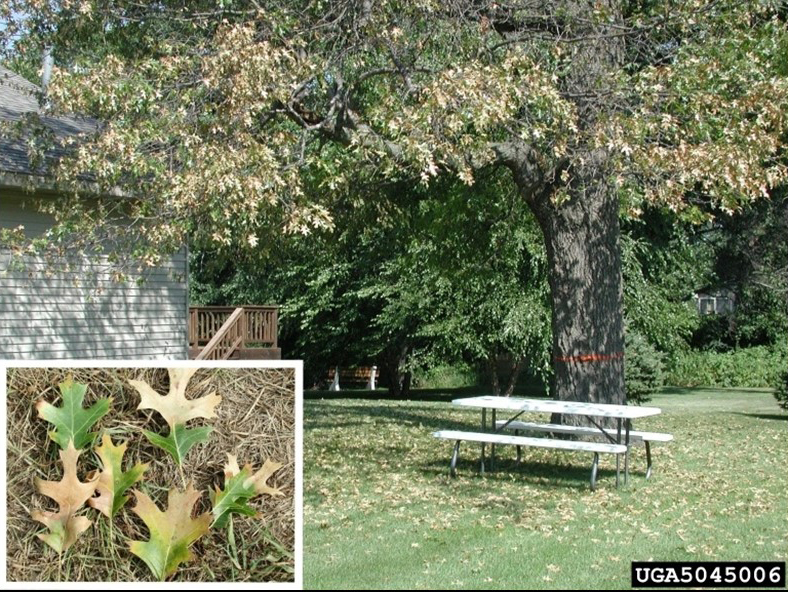 We can all help with prevention and early detection of this devastating disease.

The oak wilt fungus can stay alive on cut firewood for up to year. If an infected tree was cut down for firewood, it should be burned or disposed of by a qualified professional as quickly as possible. Taking firewood to a camp or cottage can spread many different pests and diseases to other areas of the province.

Avoid routine pruning of oak trees between April and July

This is when sap beetles are active and are attracted to the sweet-smelling fungal mats located under the bark of infected oaks, potentially carrying the fungal spores to oak trees with open wounds from pruning cuts. If the work is an emergency than prune branches that are only needed to make the area safe. Immediately after the wound is created, paint the area with pruning paint or even latex paint to provide a barrier.

Be on the lookout for unusual changes

Give your oak tree special attention and observe it during the seasons for changes. Does it look like it is suffering from drought when there is not one? Oak trees should have their leaves in the spring and summer months. Green or browning leaves on the ground in July and dropping early is a common sign of oak wilt.

It is good practice to have your trees inspected yearly. An arborist may be able to see symptoms in oak trees that would not stand out to a homeowner.

Oak trees make up about 1% - 2% of London’s urban forest. There are an estimated 8,000 oak trees with about half being red oak types and the other half being white oak types.

The City follows best practices and schedules routine non-emergency pruning of oaks outside of the months between April and July during the active period of sap feeding beetles.

Although oak trees make up a relatively small percentage of the urban forest they are a very important “key” species, usually living for centuries and growing to a large size. They provide food, shelter and a place to live for hundreds of other species of native wildlife. Many of London’s older mature trees are oaks which contribute to a diverse tree canopy cover.